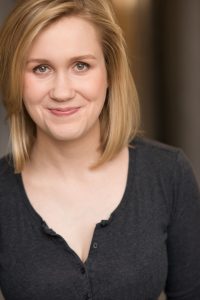 Rebecca is an accent and dialect coach working in film, television and theatre.

She specialises in North American accents.

Born and raised in the United States Rebecca studied acting at Northwestern University in Chicago before completing her MFA in Voice Studies from the Royal Central School of Speech & Drama. She is a specialist in General/Standard American accents along with regional and ethnic accents of North America. She is also fluent in French.

She has also worked as a voice and dialect tutor at the Royal School of Speech & Drama, the Royal Welsh College of Music & Drama, ArtsEd in London, East 15 Acting School, Trinity Laban Conservatoire, Fourth Monkey Actor Training Company and The Second City in Chicago.

Get the book: Mastering An American Accent (out now!)
Patsy Ferran:
“Because of Rebecca Gausnell I can confidently say my American accent is the best it’s ever been.  Whether it’s technique or ‘the feel’ of an accent – Rebecca will have constructed a varied, comprehensive and accessible toolkit that will no doubt provide full-proof gems to guide and refine your American accent. I highly HIGHLY recommend.”
Luke Thallon:
“Rebecca’s work has changed my perception of what I can do as an actor and consequently, in quite a tangible way, my life.”
Ed Skrein:
“Rebecca has been a revelation for me. Her approach to teaching involves visual, audio, physical, and emotional techniques that have helped me so much and got me to a place where I feel comfortable and confident when on set. She has been irreplaceable.. and she makes it fun! Very grateful.”
Lydia Wilson:
“I worked with Rebecca on recreating a real-life person’s dialect in performance. Her ear is extraordinary and she was amazing in identifying technically what was going on with this person’s dialect and how I could recreate that.  My sessions with Rebecca became an anchor for the entire rehearsal and performance process.  Rebecca engages holistically with how psyche and context inform the way dialect is shaped. Her deep knowledge of acting technique makes working with her nourishing all round. Rebecca’s work is highly practical, and on top of all this, we had a laugh.”
From Media:
NYTIMES
“There’s no denying the swagger brought by its leading man Orlando Bloom, playing a Texas contract killer with a husky-voiced insouciance and pitch-perfect accent.”
VARIETY
“Fuzz is played by Ed Skrein who works diabolical wonders with it … he makes every f’real delectable.”