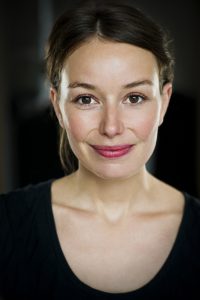 Marion Déprez is an experienced teacher and became a French language coach for the film industry in 2017. A Graduate in French from the university of La Sorbonne, Paris IV, she worked for over 10 years teaching French as a foreign language specialising in pronunciation.

Déprez’s work for films comprises of coaching actors in acting in French.

Marion creates resources for voice department to coach actors with their French accent in English.

She teaches English to, interprets for and assists French actors on British shoots.

Marion Déprez moved to the UK in 2005  to complete a Master I and a diploma from La Sorbonne in French as a foreign language. She then trained in London as a performer and director in Jacques Lecoq School of Physical Theatre and started a career as an actress/ director and a French teacher.

She is currently working with Suranne Jones for Gentleman Jack.