Born in Ireland, educated in England- a love of singing, language and a dialectically itinerant life, lay the foundations for Majella's career choice.
She has worked as a voice/dialect coach for over twenty years. Prior to that she spent a very rewarding time in Education before pursuing her enthusiasm for voice and love of accents at The Central School of Speech and Drama.

A teacher all her life, Majella believes in building a professional relationship with an actor/client that is both enabling and confidence enhancing.
Encouragement remains a key tenet of Majella's approach and being open to discover the most effective and productive route to learning.
A sense of humour is another vital ingredient.

" I first worked with Majella on my revival of Mike Leigh's 'Abigail's Party' which played Hampstead Theatre and the west End in 2002. Where possible, she has worked on every production of mine since. She is simply brilliant at assisting the actors inhabit their characters through the dialect rather than be strait jacketed by it. Even if an actor believes that an accent may be beyond them, Majella's gentle encouragement and clarity of teaching ensures that they find a voice they did not even know they had, imbuing them with enormous self-confidence and skill. i could not recommend Majella highly enough and I very much look forward to working with her on many more projects" 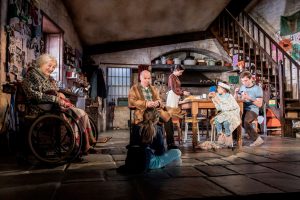