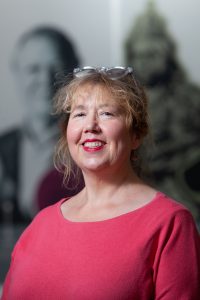 Elspeth is an ex-BBC Producer who escaped the corporation in 2000 to follow her passion to become a Voice Coach. She invested in the MA in Voice Studies at Central School of Speech and Drama.

After years of freezing her ass off on BBC locations, she prefers the relative warmth of a theatre rehearsal room or an ADR studio and loves working with actors to put together the jigsaw puzzle of finding the right sort of accent for whatever the production may be.

Having thought she’d escaped all things television, news, features and current affairs, she has been snapped up as a leading coach with presenters, reporters, newsreaders and, of course, the ever-increasing podcasters and vloggers for such as the BBC, CNN, Channel 4, ITN and Al Jazeera.

Comedians – stand-ups who need to get out of their clubby, back of the room voices for the radio. These include Nish Kumar, Paul Sinha, Simon Jones, Tom Wrigglesworth

Having not a single sporting bone in her body, she has, in a strange twist of fate, worked successfully with many, many sports people turned commentators and presenters. Including Nadia Comaneci (gymnast), Leo Taylor (diver), Daniela Hantuchova (tennis), Paul O’Connell (rugby)

And neither can she dance…. And yet she has worked with many of the participants on BBC’s Strictly on either presenting or acting, including Ore Oduba, Carole Kirkwood, Caroline Flack, Tom Chambers, Daisy Lowe, Georgia Foote and Helen George.

She does a lot of things….. just a small snapshot

Expert Guest on Radio and TV

Elspeth is also a regular guest talking about accents and voice on programmes such as Melvyn Bragg's Matter of the North (BBC), An Immigrant's Guide to Britain (Channel 4) The Royals (Netflix), Most Shocking Moments (Channel 5) and Faking It (Channel 4).

Senior Lecturer on the Accent Module on the MA/MFA Voice Studies Course at Royal Central School of Speech and Drama. Regularly invited to hold workshops on how to learn accents and The Actors Centre and The Actors Guild

Watcher in the Woods

To Love and to Cherish

She Stoops to Conquer

Eric, Ernie and me

Roundabout Plays, Broken Biscuits, I Wanna be Yours   –   Paines Plough

The Art of Success, The Taste of the Town    –   Rose Theatre

Snookered, Forget Me Not    –   Bush Theatre

Strangers In Between    –   Kings Head Theatre