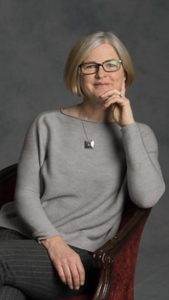 Edda Sharpe is a specialist voice and dialect coach.

Edda feels privileged to have had the opportunity through her career to work on with a huge variety of theatre companies and productions, regionally and internationally, from the RSC and West End to the smallest of touring companies. She also works extensively as a voice, body language and communication coach for the public and private sectors.

She has a deep love of accents, voices, character and people, and her career has given her the opportunity to develop the skills and understanding to bridge the needs of the actor, the director, the text and the production.

She was Head of Voice and Dialect at the Shaw Festival Theatre in Canada for 20 years, working on over 100 productions there. She was Head of Voice at e15 Acting School from 1997 – 2001 and was the principal dialect teacher on the MA Voice Studies course at Central School of Speech and Drama for eight years. Edda has also provided teaching and masterclasses for Lamda, e15, Guildford, Arts Educational, Mountview, LIPA, Bristol Old Vic Theatre School and The Royal Birmingham Conservatoire.

Edda's ground-breaking first book, 'How To Do Accents' (co-written with Jan Haydn Rowles) was published by Oberon Press in Oct 2007 and is a National Theatre best seller.

Rsc: The Rover, Volpone, Wendy and Peter Pan, What Country Friend is This? The Homecoming, I’ll Be The Devil